Colleges and Universities in Rhode Island

The Ocean State is the smallest in the United States. Rhode Island was the first colony to declare independence from British rule. The state has a diverse New England population and a rich history. For such a small state, Rhode Island has two public universities, one community college, a US Navy college and nine other private institutions. Brown University is one of the most distinguished schools in Rhode Island, a state that puts a high value on education.

Rhode Island has about 1.1 million residents within its 1,045 square miles. That’s just over 1,000 people per every square mile. The population is about 78% white, 12% Hispanic or Latino, 6% black, and 3% Asian. About 78% of Rhode Islanders over 25-years-old have their high school diploma and 26% have their bachelor’s degree or higher. Rhode Island is one of the wealthier states in the nation, and the median household income is above the national median at about $54,500. 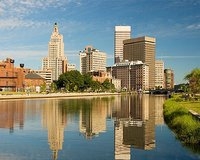 Rhode Island is home to a number of Fortune 500 and Fortune 100 companies including Citizens Financial Group, Hasbro, and American Power Conversion. The largest portion of the economy in Rhode Island is composed of health services. Tourism is the next biggest industry followed by manufacturing. Things that are produced here include electrical equipment, machinery, and ships. Whatever you would like to make a career in, Rhode Island has excellent business opportunities for young professionals and students looking to make their start.

Things to Do in Rhode Island 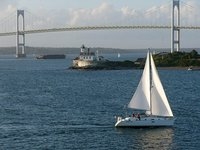 Rhode Island is filled with opportunities to enjoy the Atlantic coast, great cities like Providence, and outdoor adventures in the New England wilderness. Plus, Rhode Island is so small that driving into New York, Massachusetts, or Connecticut for a wider array of activities is always an option. Head to Block Island to enjoy outdoor activities like wildlife watching, hiking, boating, photography, and more. Block Island is also home to the Block Island National Wildlife Refuge, a place where over 250 species of migratory birds visit in droves every year.

In Providence visit the state’s most popular park, Goddard Memorial State Park. This expansive park features forested areas and lawns, picnic areas and playing fields, and a state of the art performing arts center. In the evening, visit WaterFire Providence, an award-winning sculpture comprised of about 100 bonfires on a river. This beautiful site has attracted millions of visitors since its opening in 1994.

If you are a resident of Rhode Island interested in earning a college diploma, find a college degree or certificate from an accredited Rhode Island college or university near you.

There was an error loading the featured schools for this state

No featured schools for Rhode Island